The grey squirrel was introduced from the USA into approximately 30 sites across the UK from 1876–1930. Grey squirrels can cause serious damage through their gnawing of cables, building structures and other vulnerable materials such as insulation as they search for food or nesting material. 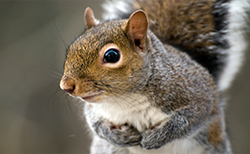 They will readily inhabit lofts, attics and roof spaces as well as outbuildings. Signs of their presence will be scratching noises and droppings, however, these can be mistaken for rat droppings. They are not thought to carry human diseases but can bite if they are frightened or cornered. In addition, grey squirrels may pass fleas to domestic animals & humans.

Appearance: Adult grey squirrels average 35cm in length and are between 450–650g in weight. They are grey-brown in colour. Squirrel kittens appear when they are around seven weeks old, and look like smaller versions of their parents.

Lifecycle: Grey squirrels can survive in copses, shrubs, hedgerows and trees, and build their nests from twigs, leaves and moss. They have a varied diet of seeds, buds, flowers, shoots, nuts, berries and fruit from many trees and shrubs, and will also eat fungi and insects. There are two breeding seasons each year, with 3-7 kittens in each litter.

Kittens are born with their eyes closed, without teeth and with no hair. After about seven weeks they look just like small versions of their parents and are ready to leave the drey (nest).

Treatment: A general treatment for squirrels will consist of baiting and trapping. The bait used is a warfarin based grain bait and the traps used are instant kill traps. Once the current infestation has been dealt with it is important to proof any access points allowing access to squirrels, this is to prevent re-infestation.

Call now for a competitive price.

Power Pest Control can protect your home and business from all types of unwanted pests. Current seasonal pests most likely to be a problem this time of the year…