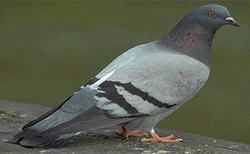 Biology: Breeding can occur throughout the year, but the peak occurs between March and July. Two white eggs are laid and incubated for 17-19 days by both parents. The young pigeons or squabs are fed on highly proteinceous Pigeon milk. But this gradually replaced by regurgitated grain. The young are independent after 30-37 days. Up to 4 broods maybe reared during the year. Some young birds breed at 6 months.

Habits: Nests are built in or on buildings, bridges, ledges or hollows such as gutters. Grass, twigs, feathers and scraps such as pieces of wire are used in their unusually flimsy nests. Feral Pigeons mainly rely on spillage’s or scraps left by the public. Some pigeons fly to arable farmlands to feed on sowings and stubbles. Pigeons normally feed in flocks.

Treatment: With pigeons nesting in areas where they are not welcome, deterrent products are used to keep them away. This is normally by means of proofing with pointed spikes, trip wire or complex netting systems. In areas where pigeons are a real problem due to the numbers, a cull maybe needed eliminating a percentage of the pigeon population within that area. Pigeons also carry many diseases, some of which can be transmitted to humans if droppings contaminate food stores, bakeries or canteens. They also carry a mite which causes skin disease, and feather dust can cause allergic alveolitis or ‘pigeon fancier’s lung’. Feral pigeon flocks can harbour Newcastle disease which can be passed to domestic poultry if their feed is contaminated by droppings.

Call now for a competitive price.

Power Pest Control can protect your home and business from all types of unwanted pests. Current seasonal pests most likely to be a problem this time of the year…